Since from myself another self I turned

Klara Utke Acs is an artist working with dance and choreography based in Stockholm. She works with poetics and body politics in the borderlands of choreography, dramaturgy, sound, film, text and visual arts. Klara is dealing with questions regarding choreographic frameworks, the relation between dancer and dancing as well as the dramaturgical knowledge of a performer. She is working with discourse in proximity to her artistic production. In particular, Klara is busy with counter-hegemonic strategies from queer and crip writing and lived experience. Collaborative and collective processes are central in the work and Klara strives to question and challenge authorship and hierarchies in her roles as both a maker and a performer. Throughout the past years, she has created a series of works focusing on affect landscapes and subversive poetics of positioning oneself non-verbally.

Klara holds a BA in Dance Performance from DOCH, Stockholm University of the Arts. She is an active contributor to the dance communities in both Stockholm and Copenhagen, where she is from. She is a board member of Interim Kultur and a member of Insister Space and höjden. She initiated and still organizes the ongoing dance and reading circle POSSE. Her work has been presented in Sweden, Denmark, Norway, Germany and the UK. She has performed in works by artists such as Pan Daijing, Pontus Pettersson, Ellen Söderhult, Soho Rezanejad, Young Girl Reading Group, Cassie Augusta Jørgensen, Stina Nyberg and Eleanor Bauer. 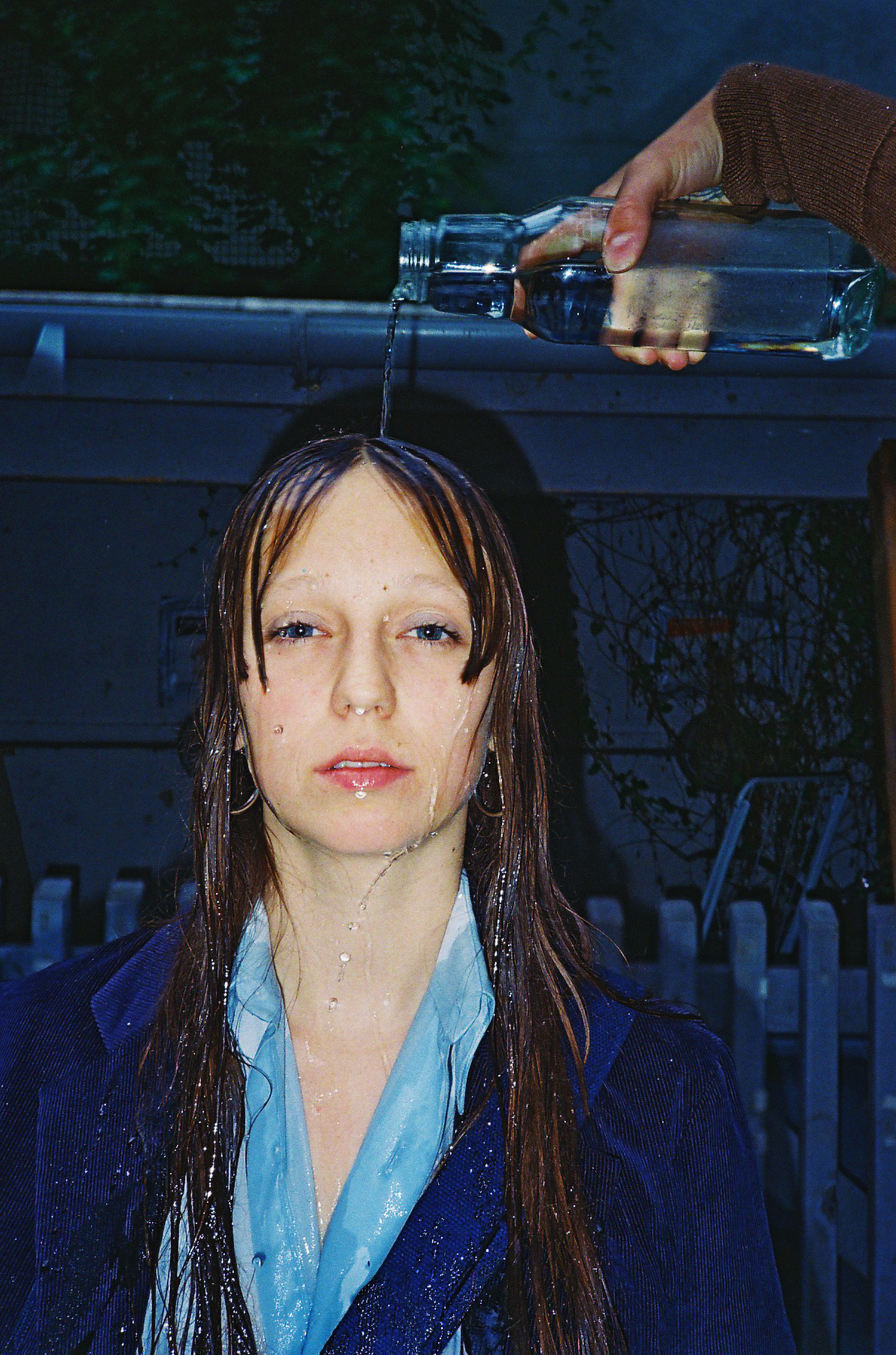 arrivals procastinate *echo* is a polyphony of choreographies initiated by dancer and performer Klara Utke Acs. It is a practice of social posing as a nonverbal – subtle yet forceful – mode of political positioning. As an eco-system of bodies, subjects and aliens, the performance is in instant dialogue with its surroundings. Melting into the situation where it takes place, it is indistinguishable from its environment. Meanwhile, the question arises: is the position of our bodies negotiable?
arrivals procastinate *echo* has been developed with performers Corinne Mustonen, Hanna Westling and Am Ertl, scenographer Tove Dreiman and composer Soho Rezanejad.

Performed at Norbergfestival 2018 as a part of the Choreomania program curated by Frida Sandström and at Made in Space 2017 by Space10, Copenhagen. 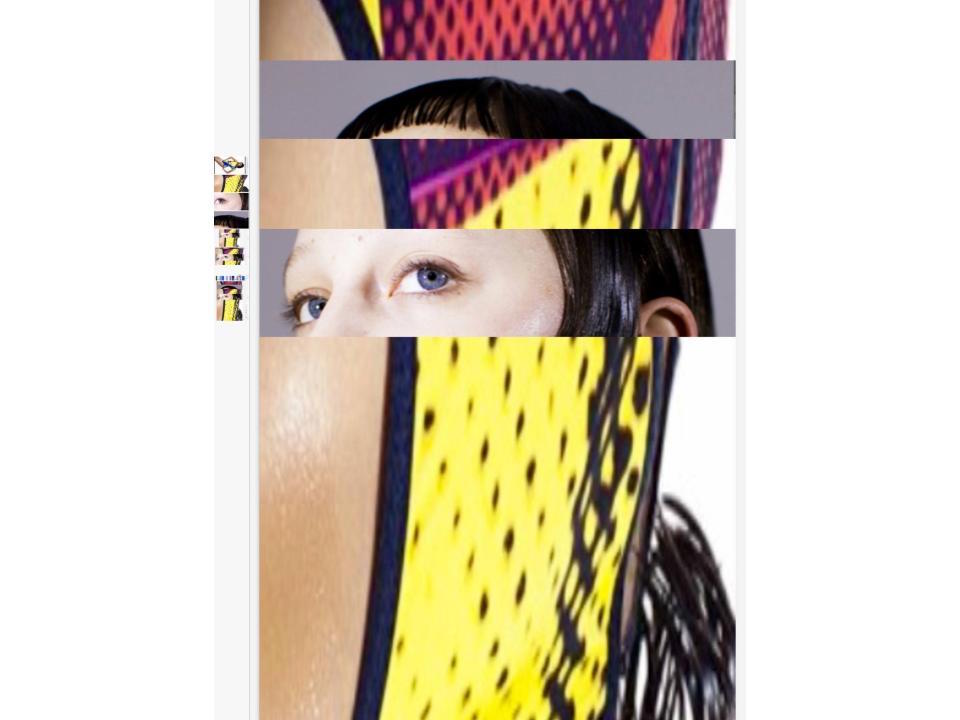 Made with poses asymptote *hanging out* and arrivals procrastinate *echo*

poses asymptote *hanging out* is a solo build on poses and contemporary iconography. It repeats images and projections of feminine figures over and over again as a subversive strategy to dismantle and mold their expressions. Departing from visual realm of contemporary communication it invites the perceiver to alter their perception of the stillness and movements of posing. Through repetitions the choreopgraphy renders the movements as if still, like statues of memory spread in the room.

poses asymptote *hanging out* is choreographed and performed by Klara Utke Acs. The sound is made by DJ HVAD, remixed by Sufie Elmgreen.

Performed at The Publication by Galerie at Overgaden, CPH:DOX/Kunsthal Charlottenborg, Minibar and DOCH, 2017-2018 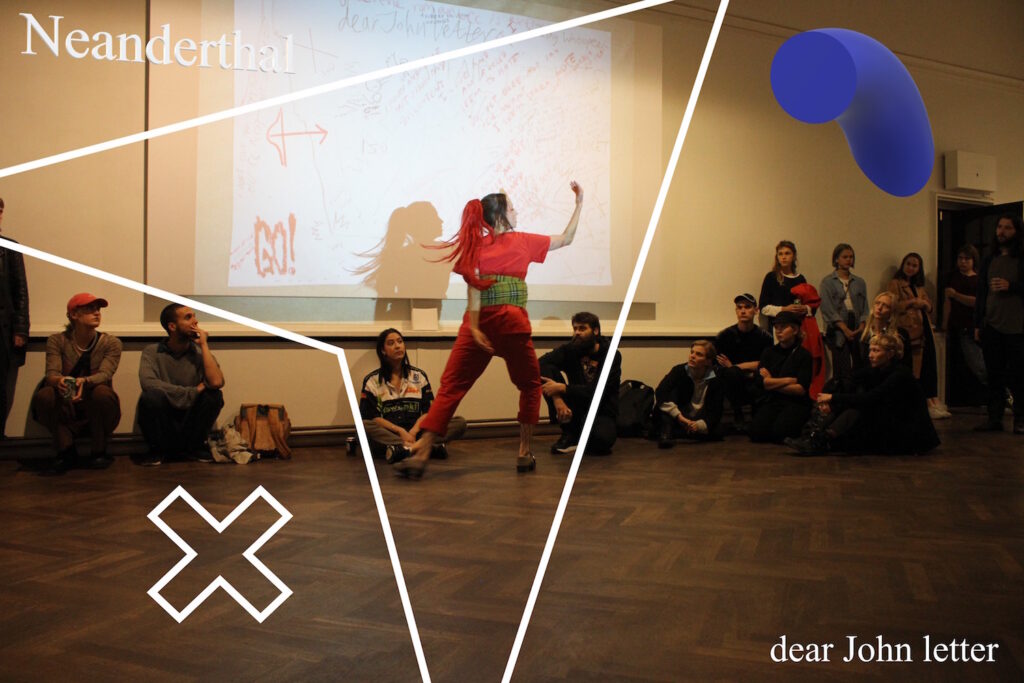 I grieve and dare not show my discontent
I love and yet am forced to seem to hate
I do, yet dare not say I ever meant
I seem stark mute but inwardly do prate
I am and not
I freeze and yet am burned
Since from myself another self I turned

Neanderthal dear John letter is a dance dealing heartbreak, intimate relations and an idea about the self as an unstable entity. The score for dancing is ghostwritten by Sufie Elmgreen –  somewhere in between a letter, a drawing and a poem. It is based on personal conversations on love, illness and art making between Sufie and Klara. Later the score was transcribed and put into play by using it as a dance treasure hunt map, first laid out on a rocky ground and later implemented in a white cube.

score by Sufie Elmgreen
pictures by Lydia Belevich
performed as a part of the exhibition Loungen at Konstnärshuset, September 2018 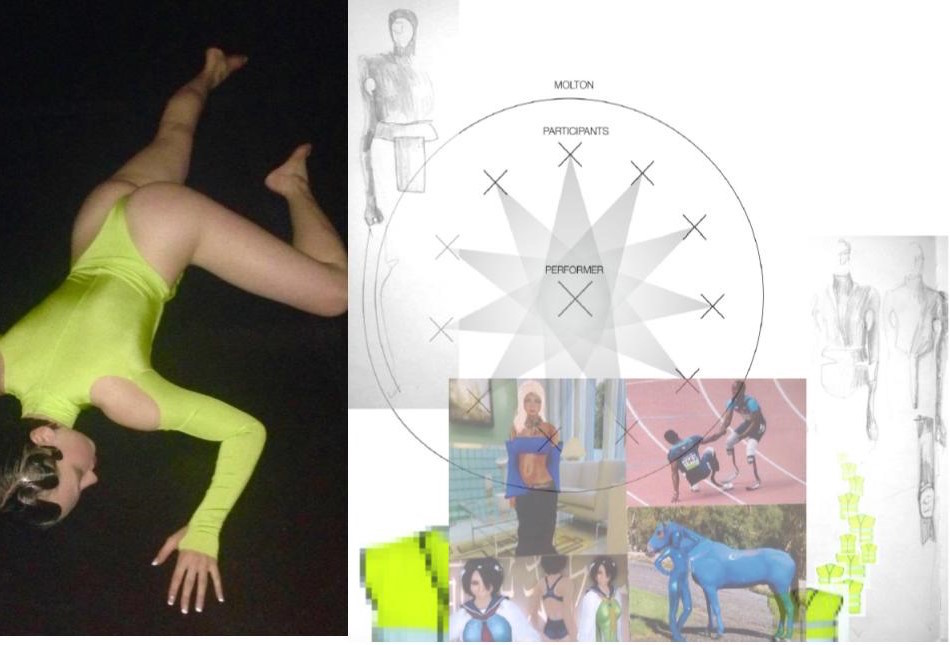 Epigenesis was a choreographic installation – a dance performance and a live concert – that explored how a digital displacement of time and space creates an image on its own. Via a live stream it connected movement from Berlin and sound from Copenhagen while being accessible through the Internet for the world wide web. Epigenesis exhibited a scenario where the human expression is inseparable from the technology that surrounds them.

The biological term “epigenesis” describes the differentiating process cells undergo, when the neural plastic potential of the brain is sculpted – a process the subject goes through as a consequence of the encounter with its surroundings. As Warren Neidich states in his essay “Art in the age of cognitive capitalism” the sculpting of the pluri-potential of the brain is the ability to internalize external activity. This does not only change the way human beings navigate in the world but also how we perceive it. In this way the subject is sculpted to become an agent for its culture. When we document experiences through mobile devices, it does not only become a projection of our ideas of aesthetics captured by this media. The interaction with the device also shapes our aesthetic experience of the event. As a consequence, our perception of aesthetics and authenticity is influenced by how we perceive events represented through technologies and contemporary media.

The composition brought the medium of documentation and virtual framing into the act of live performance, creating a physical in-between between the performer and perceiver. Thus the performance consisted of three elements: the body subject, the sound, and the virtual expression. One part was taking place in Berlin – a body moving. Whilst-while a live streaming of the performance was projected at a venue in Copenhagen. In Copenhagen music was created and responded to the movements on the screen and streamed back to Berlin. The feedback created an inter-loop, a delayed dialogue between the two artists. A circular recurring movement from the visual to the sound, from the sound to the visual. From Berlin to Copenhagen and back again. An exploration of the temporal displacement, this delayed dialogue that occurs so often our digitalised world. Epigenesis was an investigation of the digital spaces we create and the mediums we communicate and perceive through. Furthermore it is an investigation of time. Time as a non-linear concept, that recurs and create an effect in the present. 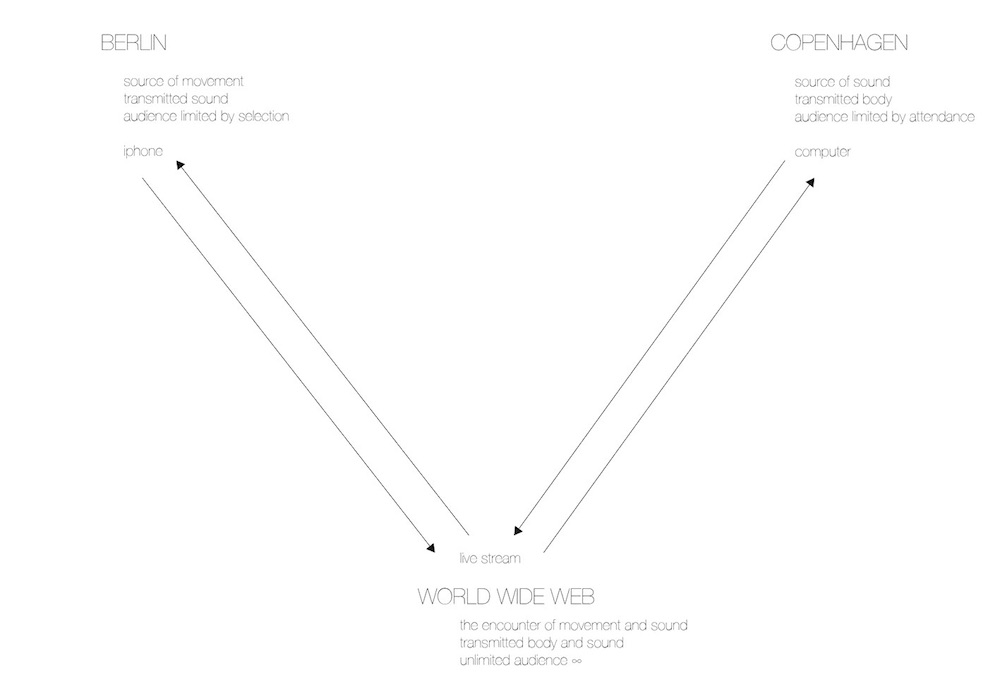 In Berlin the audience members, the sheborgs from Young Girl Reading Group perceived every movement of Klara’s through screens. They agreed upon only watching the performance through a mobile device. This was a dogma of ‘Epigenesis‘. Following the moving body subject through the camera, the subjective experiences are becoming a collective movement not only in-capturing the movement of the performer but also shaping a living scenography. A reversed Panopticon. The audience was guided through specific instructions – a choreographic score – shaping lighting of the installation. In this way the installation took character of a total choreography. With the eyes only on the screen, the participants moved collectively from their different points of view: each subject became a part taker in a larger physical and unconscious motion.

In Copenhagen musician Christian Stadsgaard was situated behind a screen in the Gallery. A patchwork of transparent foam formed the movie screen, so that the projection was visible from both sides. In this way he was only able to speak through the sound of his electronic instruments. The connection was lacking which resulted in only glimpses of the body coming through. The sensation of a bad skype conversation – the expression of a bad internet connection. In the end the online live-stream channel broke down. An alternative connection was established (abandoning the online viewers) and the artistic conversation was re-established and the performance executed. Through the live stream of the two different voices, the virtual expression emerged and became a performative entity on its own.
March 2015 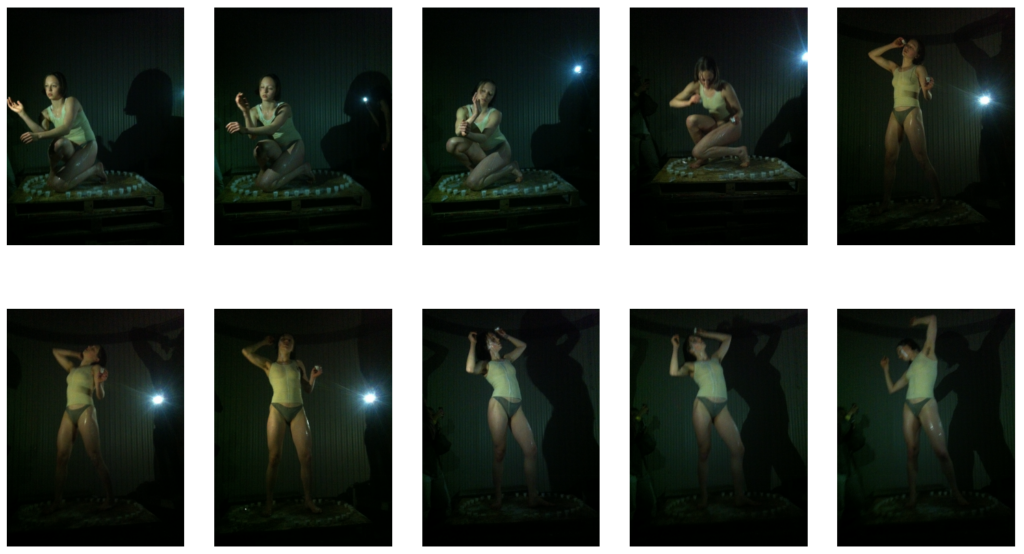 Ai, Agatha manifests in a reality, in which body subjects are merging through technology. Agatha Valkyrie Ice is a virtual character developed by The Young Girl Reading Group, who was part taking in the performance. In Ai, Agatha, Agatha was made perceivable through the meeting between bodies and digital technology.

No one could enter without a mobile device. The device was needed in order to perceive the performance. In order to enter the dark room one had to sign a contract: one would only perceive the performance through the device. Only the performer had no device but was only visible as a consequence of the lights from the surrounding devices. Ai, Agatha was made as a site specific installation in the dark room of a rave party. Music pumping. People sweating.

During the performance body subjects were dissolving. This is indicated by the use of the non-personal pronoun Ai, the only pronoun pronounced in the context of Agatha. By signing and following the directions of the contract each participator was a co-creator of the performance – rather than a grey mass of passive audience members. The participators put light unto the performance, literally as well as conceptually. Each of these individuals framed the visual experience through a mobile device, and hereby the subject’s perception became inseparable from their interaction with the device. They were merging into contemporary cyborgs.
November 2014 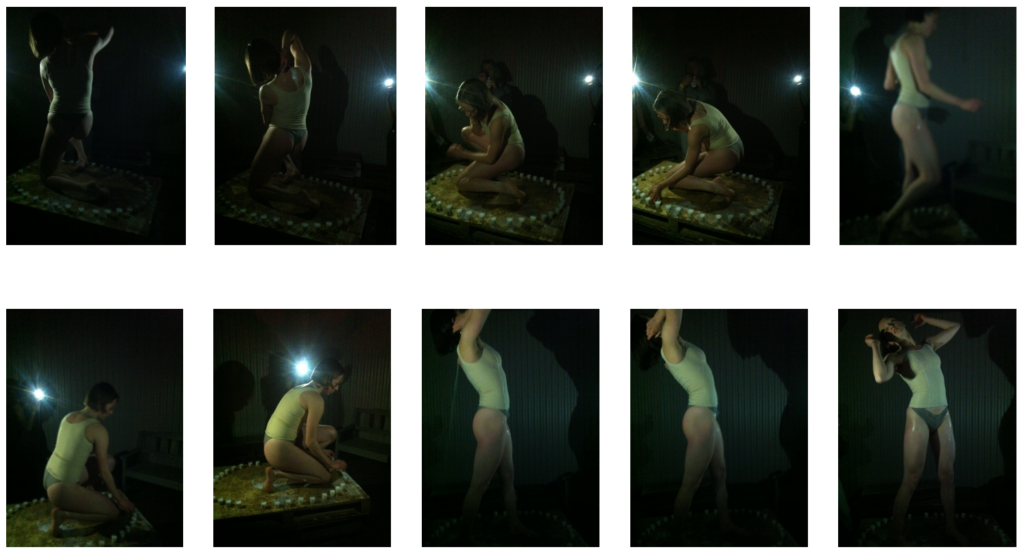 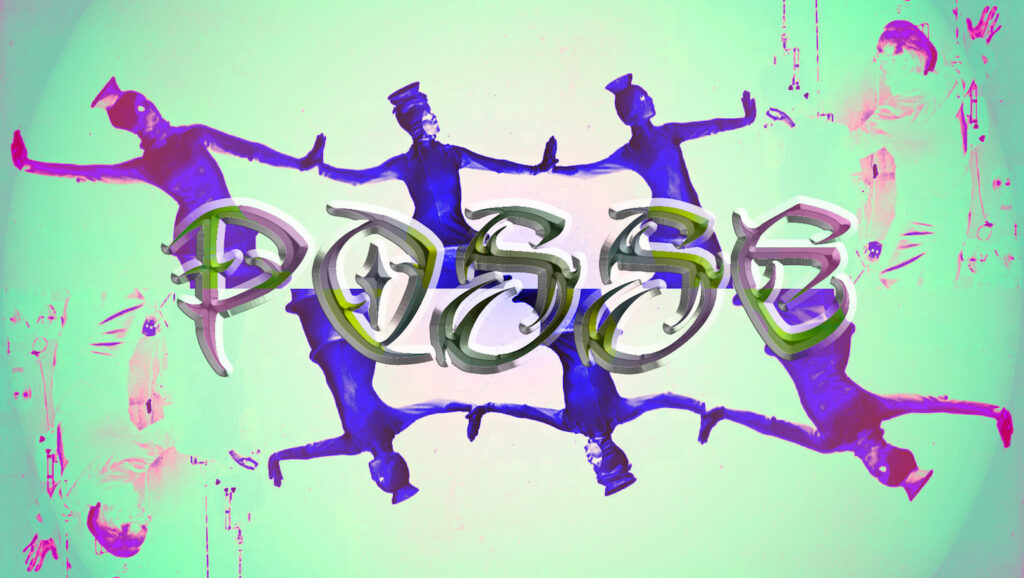 P0$$€ dance and reading is a weekly gathering for people wanting to spend time dancing and reading together. It is an open-ended study circle for practitioners within contemporary dance and other curious ones. We meet up weekly in different constellations to practice reading and dancing together and investigate what this could mean. Each session is hosted by one or several practitioners that propose the materials: text to read, a way to read the text and dances. The text can be written be artistic, essayistic, philosophical, articles, lyrics, poetry, manifestos, scores. The methods can vary from reading in a circle one by one, to braiding hair, to intimate readings, to speaking through robotic voices. The dances can vary in style: contemporary, modern, reggaeton, body work, formalism, expressive dance, dance-rituals, scores, meditations, writing, questioning, healing, dreaming, for example.

POSSE is engaged with critical practices and with generating discourse through doing. POSSE is an institutional parasite, an autonomous entity, based on the idea that nothing is connected to everything, everything is connected to something (Harraway). The host of POSSE is changing from week to week, just like its participants. POSSE is whoever is there. POSSE was initiated by Tamara Alegre, Chloe Chignell, Louise Pousette and Klara Utke Acs, and is now organized by Louise and Klara with Austeja Vilkaityte and Alice MacKenzie. The graphics are made by Ali-eddine Abdelkhalek. POSSE is registered as an ABF-study circle and takes place primarily at c.off from February 2019.

Throughout the years they have collaborated with My Wild Flag, END FEST, c.off (SE), Scene:Bluss (NO), Galerie (Intl.), Ultimate Fantasies/Jennifer Boyd (UK) and Fresh Air Magazine (IT). During the past years sister POSSEs have emerged in Copenhagen and Melbourne. 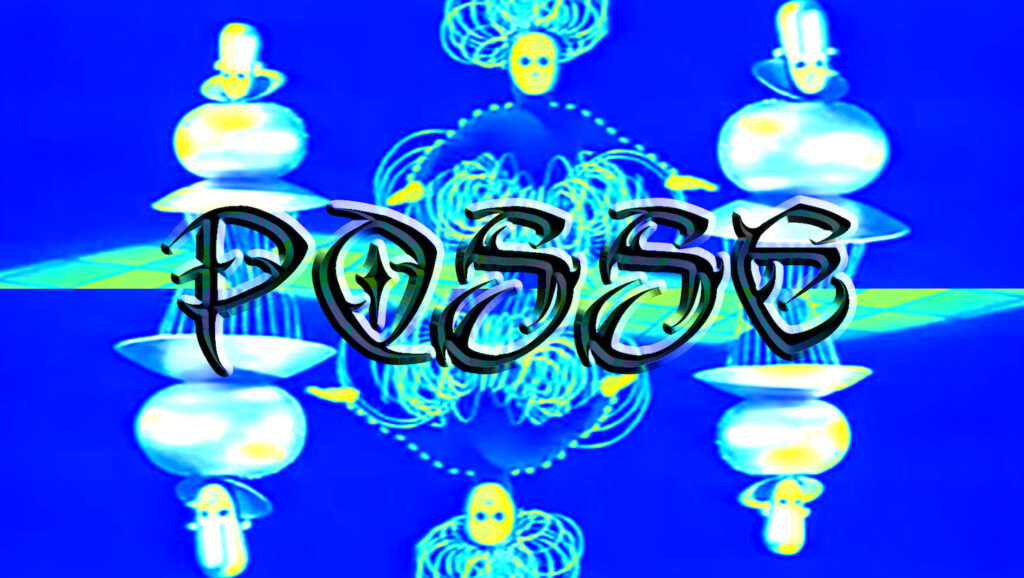 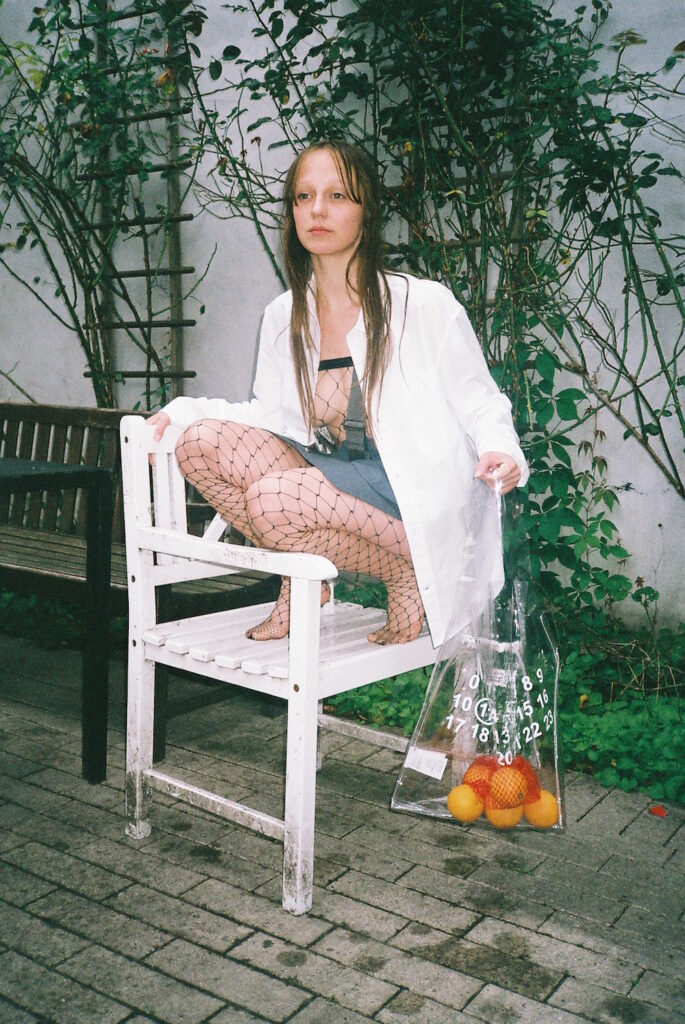 2019 choreographer and performer, Crow Without Mouth by Soho Rezanejad (DK) at Berlin Atonal

contribution to discourse / texts
2019 guest in the second episode of the podcast Navegante hosted by Karina Sarkissova discussing the topic: “Who is the contemporary dancer?” for Dutch Art Institute. https://soundcloud.com/navegantepodcast
2018 “POSSE – Copenhagen Session” published as a part of the immaterial publication “The Publication” edited and published by Galerie at Overgaden
2018 Editor of P0$$€ BL0G T4K3 0V3R in collaboration with Chloe Chignell and Louise Pousette by ENDFEST (SE). Also I contributed with the text “POSES_beta”
2017 “Når Dokumentationen Vækkes til Live” co-written with Cecilie Jørck about documentation of performance art and on the work with Autopsia, published by I DO ART (DK)
2016 “They beach” co-written with Kai Merke under the moniker Danish Dance Theater (Company) published in This Container Magazine (Intl.) by Chloe Chignell, Ellen Söderhult and Maia Means
2016 Part-taker in and contributor to Nobody’s Dance in Copenhagen initiated by Ellen Söderhult (SE) and Eleanor Bauer (BE/US) at DDSKS (DK)
2015 “body mediated” published in Shared Risk by RISK (DK)

community and board work
2019- member of höjden and co-initiator of the queer social art gatherings fake daughter
2017- member of Insister Space
2018- Board member, Interim Kultur
2017-19 Board member, Stockholm University of the Arts