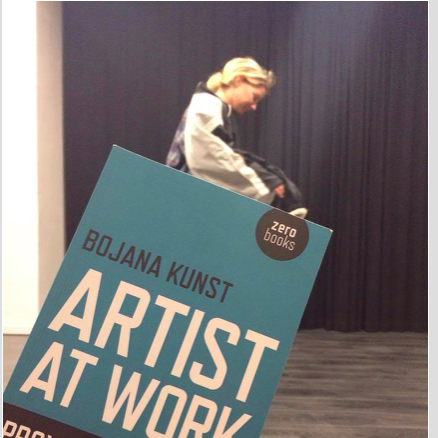 Today me, Lisa and Gry met up for the members meeting. We had forgotten to decide who was going to propose and lead the meeting so we ended up talking a bit about life before deciding on some activities together. I proposed a practice that I did for a longer period with Alma Söderberg in a workshop at DOCH. Her workshop is called sound and movement, in todays version the task was quite different as we were three people (instead of couples), and we tended to engage more in movement than sound, though there was for sure a lot of listening!

One person lied on their back receiving manipulations from the other two. (20 min)
Than the same person engaged in a movement exploration, whilst the other two was witnessing (10 min)

Afterwards we read out load from a section of Bojana Kunst’s book Artist at work; Proximity of art and capitalism called “The Female Artist between Work and Life”. 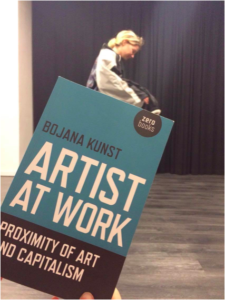 Lisa working behind Artist at work