Activities:
Reading The carrier bag theory of fiction by Ursula K. Leguin
Dancing and automatic writing in cycles (7. min x 3)
Revisiting own writing/underlining important things
Making statements and speculations from each writing cycle (the piece of text is the utterer)
Sharing and discussing amongst each other 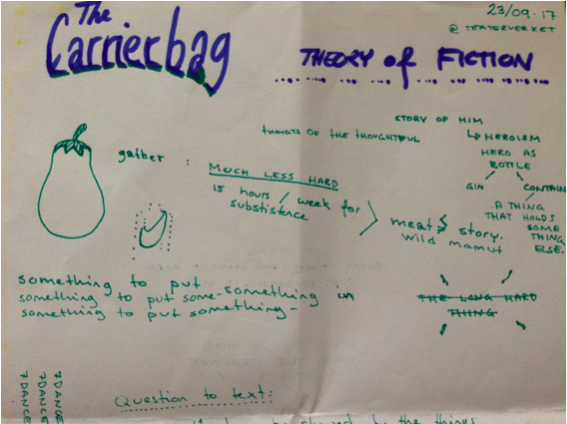 Is there a problem with the fact that the starting point of the bag is the separation between inside and outside?

Is training being with ‘the other’/others a part of solving the problem? (what problem?)

What is the function of separating and touching?

Both dealing with complexity and simplicity makes me anry.

What is the bag made of?

I need a bag that can carry the important moment of doing a magic movement.

Everything is uncomfortable, sometimes.

I wonder, when we say container in this context, how people see it. Do you see it as a thing? Does it resemble something?

Move the container to a more uncomfortable place.

Somehow this became a who am I question.

Does the container have to be important?

Putting the body together as one.

Putting the container together as one.

Are we ever neutral?

A good leader makes it possible for others.

Maybe transparency is not enough.

The leader should say why they are proposing something, how they have engaged in it before and with whom.

Maybe a radical proposal, if the proposal is seen as the container for the work taking place at INSISTERSPACE-meeting is a very tight bottle that forces the content into a particular shape, or is a net so wide and so loose that the tiny content inside spreads out and disappears into the fabric like the crumbles in the bottom of my backpack.

When and how does leading become carrying?

Can a dance be a novel instead of a story?

I was introduced to the text by Ursula K. Leguin at a festival named and developed around the text, hosted by Danseatelier this summer. The discussions they arranged around it were so good and it felt like a suiting text for INSISTERSPACE as well as Saturday mornings. (it can easily be found as a pdf on the internet)

Danseatelier is a Danish collective, a group of young artists that have made a big influence on the Copenhagen dance scene through creating a place for artistic work, collective processes and exchange. A very important inspiration for INSISTERSPACE, check them out http://danseatelier.dk/.

(note: featured image of this post is from another meeting)